The Family recently grew by one member. No, I did not produce any more precocious progeny; this time, I bought it. The progeny. Of a dog.

This was an ongoing conversation in our home, with The Kidling actively involved. We looked at old dogs, puppies, and middle-aged dogs. Rescues and breeder pups. Near and far. When I finally found a pup I was genuinely enamored of, I showed The Kidling a picture.

Cries of When can we get her?! and How many days is that?!?!? filled every waking moment at Our House. I deferred and deflected while working out a plan, then I did something new.

“I am working with the woman who has her, Kidling. I think we can get her sometime next week,” I assured her.

The covetous response was overwhelming. More pleading, this time with Can we get her as early as possible next week? and How many days is that? erupting from her 6 year-old mouth with angst befitting a child 7 years her senior. I explained the approximate amount of time that would be, stressing that it was really just an estimate, as we were still figuring out the details.

I had a plan. Damn genius, if you ask me. You see, The Kidling was spending the weekend with The Grandma, and I made plans to get that sweet little bundle of fur the day before The Kidling returned to Our Town. I would drive to the agreed-upon location to pick The Kidling up, she would be so so so happy to see me, then TA-DA the pooch would prance up accompanied by squeals of glee, lick The Kidling’s sweet face, and we would all live happily ever after (yes, I am ignoring the teen years in this scenario. Sue me.) 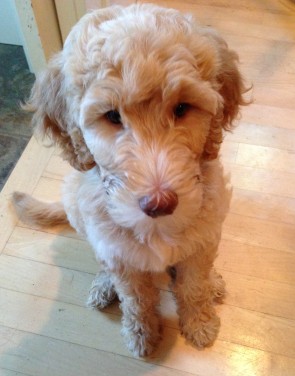 The cutest dog in the entire world lives in Our House. Coincidentally, so does the cutest (and smartest) child.

The big day arrived. There was a minor kink in the form of a freaking monsoon that made its way across the Middle U.S. that afternoon, but otherwise, the plan went off without a hitch. Her face registered shock and delight in that beautiful moment where she first laid eyes on The Pup. Joy radiated from every tiny kidling pore as we loaded up the car and drove back toward Our Town.

I basked in The Kidling’s reaction, watching and feeling and hearing evidence of her bliss. “Do you like her?” I asked knowingly, as the car rolled down the rain-soaked highway.

“I like her even better in person—I mean—in animal!”

Yes, The Kidling has met her new best friend.

Psst. You. Yeah, you. Check this out.

This was the weekend of forts. If you know The Kidling personally (as in, you have met her in real life. I admit that is a wholly arbitrary distinction. Many of you loyal readers surely know her as well as anyone else), this might seem to be an odd statement.

“Aren’t they all weekends of forts?” you are asking your iPads/phones/computer screens. “Wouldn’t a more accurate statement be ‘this is a lifetime of forts.’? The Mama should check with me before clicking ‘publish’. I could tell her a thing or two.”

And you would be right.

On that glorious, fort-sleeping evening, The Kidling prepared her bed for a night’s rest. She tucked and adjusted, rearranged and spread. Once everything was in its rightful place, she picked up a flag she had made and looked around the fort with great contemplation. The silver tassels glittered as she waved it around, thinking. Before I had a chance to ask what on earth she was doing, The Kidling thought out loud,

“If only I could find some logical way to stick this in here somehow!”

If, dear Kidling, you find that logic, let me know. I misplaced mine very shortly after your birth.

The Kidling has been on a weeks-long whine binge. Nary a word is spoken in the sweet contralto with which she was blessed and every sentence she utters makes my blood pressure spike. And you know what? It turns out anything said with a whine loses all traces of humor.

Friday afternoon, my bored, exhausted, post-long-day-at-the-office-with-mom child was getting ready for a sleepover.

I have no idea what I said or did, but finally, she had had it. Hands on hips and voice raised ten decibels, she shouted at me, “I’m at my rear end!”

I was at my rear end, too… until the Kidling shouted at me. Then, I regained my perspective–and my sense of humor–and thanked the universe that I got the crazy munchkin I got.

Sheesh. I get a great idea then I don’t follow through consistently. Being human is so. damn. irritating.

I somehow neglected a very important step to accompany Tuesday’s story about love. With apologies to the dictionary lovers everywhere…

The Kidling: Dad, can I have this lemon Starburst?

The Dada: (in disbelief) What did you say?

The Kidling: (repeats herself) This lemon sucks.

The Dada: (thinking The Kidling has been surprised by an unexpected banana Starburst or some similarly disappointing flavor, says sternly) That is not a nice thing to say. You know we don’t say that, right?

The Dada: Did you hear that from a bigger kid at your summer program?

The Dada: I see. Well, it’s another way of saying that something isn’t very good.

The Kidling: No, Dad. I was saying it’s in my mouth and I’m sucking.

You know I am obsessive about quote accuracy, so let me ensure we are all on the same page here. This exchange occurred while The Mama was traveling for work. Now, while The Dada has an impressive memory, he didn’t write it down.

Notice I said impressive, not obsessive? The former describes The Dada whereas the latter describes… well… you know. Don’t make me say it. Alas, I must be away from The Family now and then. This means I sacrifice the occasional story to the gods of employment.